Even when the alone times are so much longer than the moments of connection, I have to know that these are the times of the greatest, deepest, inner growth.
Siman Tov and Mazal Tov

Mazal Tov (Congratulations) to Mr. & Mrs. Greenberg (not the real name) who had, yet, another grandchild.

Mazal Tov to Mr. & Mrs. Smith who are marrying off their daughter.

Congratulations to Dr. and Mrs. Abramowitz who are having another Simcha (celebration.)

Mazal Tov’s announced in shul on Shabbos are more in number than one can count.

There are couples in our congregation who have had their ninth, tenth, and even twenty-fifth grandchild.

Our community is so fortunate and blessed.

Those who attend Shabbos services listen to announcements filled with wonderful news along with opportunities to support each other in tough times.

I am happy and honored to be a part of such people and their families.

I love connecting with the people.

Yet, I can’t help but notice how different it is for so many of the clients with whom I am blessed to work in my alternative medicine practice.

The contrast is huge.

I ponder how they would feel, or how they do feel, hearing all those Mazal Tov’s, while not believing it can happen for them,

yet still hoping that it will.

Those Who Walk Alone

Those who walk alone….

Those who suffer from maladies which build energetic walls,

walls which disconnect them from themselves, and from the warmth of friendship, and from relationship.

It’s not just about now.

It’s about how the past is viewed,

and how the future is anticipated.

Those who walk alone, within and without,

those on the autism spectrum,

and those not on the spectrum,

and those whose ability to verbally process, limits relationships . . .

and those who think brilliantly,

but are not able to express that in fluent speech . . .

and those who are inundated with,

and distracted by, voices and/or visions,

and those whose great sensory sensitivity makes it painful to be touched, or painful to listen and hear.

Of all those clients,

I have never met one who did not want to be in relationship.

I never met one who did not want friends,

or who did not want to date,

to marry, and to have children.

I have never met one who did not want the life that they see that “everyone else” has,

or that they think everyone has.

And what about those of us who are alone because they are widowed,

or never been married,

And those who have not been blessed with children of their own?

How do they feel when hearing such announcements?

What are they thinking?

and hardly any branches. 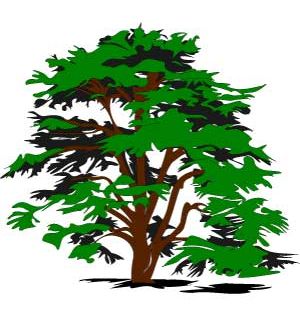 It is only those who are alone who receive prophesy.

for myself, and for the holy people with whom I work.

I think about some of my favorite Biblical heroes.

I learn that the feeling of being the lone tree is that of being rooted in Avraham.

Avraham Avinu was the lone tree.

Yitzchak was for sure a loner,

as was Rivka, his wife who received prophecy.

Yakov was alone when he found God standing over him telling him that He will give the land to him and his descendants (Genesis 28:13).

Yoseph was a loner in that he was different from everyone, even his brothers.

He was ostracized, the epitome of being alone,

and he was thought to be left alone to die.

Moshe was alone, a lone shepherd, when he heard the voice of God Himself.

Even non-Jewish religions portray those who they believe spoke with God as having been alone at the time of the conversation.

It makes me wonder if aloneness is a prerequisite for growing oneself and connecting to the Almighty.

It is only the Jewish people who heard God when they were with each other, not alone.

But it was too much for them to take in and so they asked to be excused from the experience.

Re-examining some of the writings of the Ramchal and learning more about his life, gave me another perspective on the concept of “alone.”

This great man, Rabbi Moshe Chaim Luzzatto 1 (The Ramchal,) lived much of his life alone, but not in loneliness.

The Ramchal had just emigrated from Amsterdam to Israel with his wife and son. They traveled alone, just the three of them.

Can we even conceive that someone as great as the Ramchal had no one with him, other than his immediate family?

The fact is that anyone who participated with the Ramchal was burned and their families destroyed.

Contrast that with today.

Any big Rosh Yeshiva (Head of a Yeshiva) who travels to Israel, will have 50 people escorting him on the plane.

Here, the Ramchal was one of the giants of the world going to Israel and he traveled, with his wife and son, alone.

And another of the greats at that time was the Ohr HaChaim.2

The Ramchal moved to Israel, settling in Akko. This took place during the last year of the Ohr HaChaim’s life.

It was a last chance for them to meet – in this world.

Each admired the work of the other.

The Meeting That Never Happened

They planned a meeting.

The Ramchal was to travel alone from Akko to Yerushalyim for that meeting.

But the Ramchal became ill after the shiva for his wife and his son, who died in a plague.

And so he was not able to make the meeting.

Had that meeting taken place, each, the Ramchal, and the Ohr HaChaim, would have attended alone.

Rabbi Simcha Weinberg, Shlita, explains that it is believed that Shamayim (Heaven) stopped them from meeting, for it would have shaken the foundation of the world.

Imagine each going to meet the other, and each traveling alone.

The Power of Going Alone

It makes me wonder if aloneness is a prerequisite for growing oneself and connecting to the Almighty.

The power of going “alone.”

Heaven did not let the meeting happen because of how it would change the way the world was, perhaps before it was ready.

The power that had to be stopped by Heaven was in the power of the Ramchal going it alone.

It was in the power of the lone person on a journey from Akko to Yerushalyim.

The power of our own journey, from where we are to where we want to go, to where the Almighty wants us to strive to be,

that journey takes place alone – alone with the Al mighty.

Had the Ramchal had a group of people around him, Heaven would have permitted him a meeting with the Ohr HaChaim because that meeting would be with the public figure.

It was not the public, rather the alone Ramchal, who could bring the Geula (Redemption).

The “alone” Ramchal was the person who had the piercing clarity to do exactly what was right.

He approached things from the framework that there is a Derech Hashem (Way of God) and he wanted to emulate that by walking his Mesillat Yesharim (Upright Path) and that is the basis of everything. (Those are the titles of the Ramchal’s books.)

The Ramchal taught that when we choose to follow that path, it becomes the only choice we have to make.

It is not those who make the big production or who have a large following that will bring the redemption.

That is why Moshiach (The Messiah) is always described as a silent, lonely person.

Yeshua (Salvation) does not come from the people who have a large following.

Yeshua comes from the people who know how to walk it alone.

How can we know how to walk it alone, if we never experience the times of being alone?

The challenge of being a lone tree, instead of being a source of pain, becomes a blessing, an opportunity.

Is it possible that those I work with, who walk alone, are even more powerful and even more connected to the Almighty?

Does the greatness that I clearly see in them come from their aloneness?

And so, I must realize that even when family does not connect with me,

even when others don’t accept my efforts to befriend them,

even when I am not invited,

even when people respond to me as if I am invisible,

even when the alone times are so much longer than the moments of connection,

I have to know that these are the times of the greatest, deepest, inner growth.

That journey takes place alone, alone with the Almighty.

Yes, we walk alone, but not really alone.

For myself, I know that this is my journey, specially mapped out for what I need in order to do my best growth, in order to prepare me for the rest of the path ahead.

Even when I walk alone, I know there is the Almighty holding me up and staying with me, assuring me that I am never really alone, giving me opportunity to be the best that I am able.

That path is different for each of us, the path to our best growth.

1 Ramchal was a brilliant, genius rabbi, kabbalist, philosopher, and author of many great works such as The Way of God (Derech Hashem), Path of the Just (Mesillat Yesharim) and Da’at Tevunot or (The Knowing Heart).

Unfortunately, many of his writings were burned by the Torah leaders of Venice because they misinterpreted his intentions and his motives.

They prohibited him from teaching kabbalah.  So the Ramchal left Amsterdam and moved to Akko, Israel in 1743. Three years later, he and his family died in a plague. A century later, the works of The Ramchal were rediscovered and appreciated.

2 Ohr HaChaim was a Talmudist and kabbalist and was one of the most prominent rabbis in Morocco.

In 1733, he decided to leave his native country and settle in the Land of Israel, then under the Ottoman Empire. En route, he was detained in Livorno by the rich members of the

Jewish community who established a yeshiva for him. Many of his pupils later became prominent and furnished him with funds to print his (series) Ohr HaChaim.

He was received with great honor wherever he traveled. This was due to his extensive knowledge, keen intellect and extraordinary piety. In the middle of 1742 he arrived in Jerusalem where he presided at the Beit Midrash Kenesset Yisroel.

2 thoughts on “The Lone Tree: Alone But Not Alone”

About The ADHD Coach